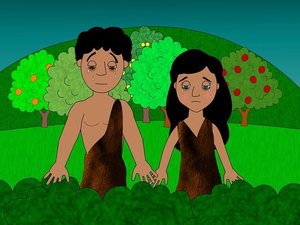 According to the Talmudic sages “every human is created with two impulses, one good and the other evil.” –Ber 6IA This theology differs fundamentally from the orthodox Christian doctrine of original sin. While the differences may seem to most as minute the consequences are profound. The Doctrine of Original sin states that man is cursed with the consequence of Adam’s sin in Gan Eden. When man enters into this

World as a child he does so through the seed of Adam and cursed with result of Adam’s sin which is spiritual death. The guilt of Adam’s sin is credited not just to Adam, but to us all. The likewise enters into a sinful world contaminated by sin, himself becoming part of that sin. In other words he is inherently sinful, as the world is inherently sinful. Consequently there is little man can do to fight against his sinful nature.

The Talmudic sages however teach that the world is not inherently sinful, for how can the creation which GOD himself calls good be evil. Furthermore; will G-D place the guilt of Adam upon us all just for being born of Adam’s seed? This seems to contradict several Biblical passages. Let’s look at a passage from the prophet Ezekiel.

Ezekiel 18:14-17 Now behold, suppose he fathers a son who sees all his father’s sins that he committed, and observing, does not do likewise. He does not eat at mountain shrines, or lift up his eyes to the idols of the house of Israel, or defile his neighbor’s wife, nor does he wrong anyone, take pledged property or commit robbery, but he gives his bread to the hungry and covers the naked with a garment, withholds his hand from mistreating the poor, does not take interest or increase, practices My laws and walks in My statutes—he will not die for the iniquity of his father, he will surely live.”

However; The Master teaches us that his generation will suffer as a result of all those who persecuted the righteous beginning with Able.

Matthew 23:35-36 “And so, upon you shall come all the righteous blood shed on earth, from the blood of righteous Abel to the blood of Zechariah son of Berechiah, whom you murdered between the Temple and the altar. Amen, I tell you, all these things will come upon this generation.”

How do we reconcile this apparent contradiction?

Let us start by examining the talmudic sages teaching on Original Sin and how it defers from orthodox Christianity.

The sages teach that man, as the head of creation, directs the world towards evil or good by his two impulses. Individually or collectively, as part of a community, man can choose to be righteous and follow his good inclinations or be wicked and follow his evil inclinations. A person’s character determines which impulse is dominant. The average person is controlled by both impulses. According to Talmud a child is born with the evil impulse, however there are differing opinions as to when the evil impulse becomes active. Rabbi Yehuda Ha Nasi (Judah the Prince) says that it is when the child takes its first breath. It is more widely accepted that the good impulse becomes active when a boy reaches Bar Mitzva and is held accountable for the first time apart from his Father.

The prevailing opinion is that the evil impulse is the result of human instinct. The evil impulse itself is not bad, since GOD creates only what is good. It is only when submission to the evil impulse that it becomes wicked. Food for example is considered a great pleasure and necessity, however when one becomes gluten he yields to the evil impulse. A good saying is that “there is sin in the use of nothing and in the abuse of everything.” The Evil impulse is needed for without it there would be no good impulse nor righteousness. In the teachings of the Talmudic sages there is no original sin but there is original temptation. According to some Talmudic teachers it is possible for one to live a perfect life free from any sin without the intervention of GOD. If this were not possible why would GOD command our Father Abraham in Genesis 17:1 to walk before Him “Perfectly”? However, how do we likewise explain the numerous times in the Torah in which GOD commands Israel to offer up a sin sacrifice for which no specific sin is mentioned (A study for another time). On the one hand the doctrine of Original Sin lends itself to the belief that man has no control over his actions and is without hope of corrections. Perhaps you have hear it said “You cannot live the Torah of GOD perfectly so why try?” Maybe the answer lies between the two. Man as the head of creation does indeed direct the world towards evil or towards good. That man was Adam when he submitted to temptation. But man was redirected (Teshuvah) towards good with the second Adam. With the new spirit He gives us we can indeed now live perfectly (in Torah obedience) before Him.

2 Samuel 22:31-33 “As for G-d, his way is perfect; the word of the Lord is flawless. He is a shield for all who take refuge in him. For who is G-d besides the L-rd? And who is the Rock except our G-d? It is G-d who arms me with strength and makes my way perfect.”

Matthew 5:48 “Therefore, be perfect, just as your Father in heaven is perfect.”

To answer the above contradiction we simply need to remember the Masters call for that generation to repent of their own sins, which most failed to do. If that generation had repented perhaps instead of suffering great persecution and exile they would have witnessed the Kingdom of GOD come in the glory of His Messiah.